Share the joy of giving with those you love—on us! 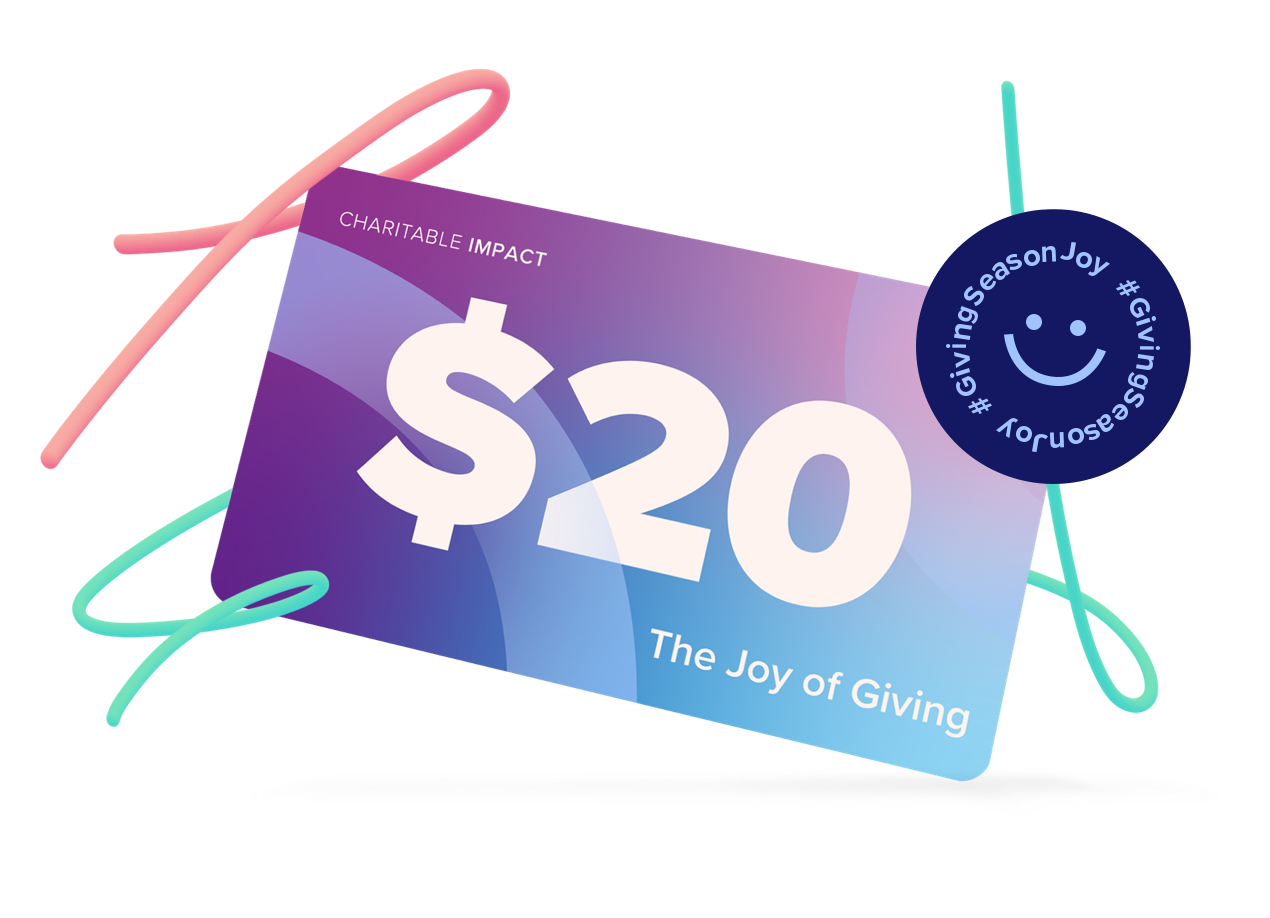 3. How to Enter: During the Contest Period and through charitableimpact.com, eligible individuals will automatically receive:

4. How to Win: Prize winners will be announced every weekday during the Contest Period. The Sponsor will randomly select one winner of a Daily Prize Pick each weekday. On December 21st, 2020, one winner of the Grand Prize and two winners of the Runner Up Prizes will be randomly selected by the Sponsor. Winners of a Daily Prize Pick are not eligible to win the Grand Prize or a Runner up Prize. Winners of a Runner up Prize are not eligible to win the Grand Prize. Odds of being selected as eligible to win a prize depends on the total number of eligible entries received during the Contest Period.

5. Value of the prizes: CAD 1,500 (the “Grand Prize”), CAD 500 (“Runner Up Prizes”), and CAD 100 (“Daily Prize Pick”) (collectively, the “Prizes”) will be added to Impact Accounts with Charitable Impact, which can be used pursuant to the Charitable Impact Account Agreement (the “Agreement”). While supplies last, including after the Contest Period if applicable, CAD 20 will be added to new Impact Accounts associated with each Contest Entry (the “Matches”). The Grand Prize, Runner Up Prizes, Daily Prize Picks and Matches are opportunities for the winner to advise or interact with CHIMP: Charitable Impact Foundation (Canada) pursuant to the Agreement and therefore are not valuable consideration. Prizes are non-transferable, non-refundable, have no cash value and must be accepted as awarded. No substitutions.

6. Prize claim conditions: Winners will be notified by phone or email address registered with Charitable Impact within approximately 48 hours of the draw.

7. Right to void, suspend or terminate: The Sponsor reserves the right to terminate, suspend or modify this Contest, in whole or in part, at any time and without notice or obligation if, in the Sponsor’s sole discretion, any factor interferes with its proper conduct as contemplated by these Official Contest Rules. Without limiting the generality of the foregoing, if the Contest, or any part thereof, is not capable of running as planned for any reason, including but not limited to participant conduct, infection by computer virus, bugs, tampering, unauthorized intervention, fraud, programming errors, or technical failures, which, in the sole discretion of the Sponsor, corrupt or affect the administration, security, fairness, integrity or proper conduct of this Contest, the Sponsor may, in its sole discretion, void any suspect entries and: (a) terminate the Contest, or any portion thereof; (b) modify or suspend the Contest, or any portion thereof, to address the impairment and then resume the Contest, or relevant portion, in a manner that best conforms to the spirit of these rules (the “Official Contest Rules”); and/or (c) award the Prizes from among the eligible, non-suspect entries received up to the time of the impairment in accordance with the winner selection criteria discussed above.

8. General conditions: The first name and first initial of the last name of a Prize winner may be used by Charitable Impact in connection with any promotion or publicity of the Contest without compensation to the Prize winner. Prize winners are encouraged to publicly share their Contest win, including on social media. Winning a Prize is contingent on fulfilling all the requirements set forth herein. Decisions of the Sponsor and/or any independent contest judging organization will be final and binding on all matters pertaining to this Contest. The Sponsor reserves the right to correct any typographical, printing, computer programming or operator errors. The Sponsor’s failure to enforce any term of these Official Contest Rules shall not constitute a waiver of that provision. The invalidity or unenforceability of any provision of these Official Contest Rules shall not affect the validity or enforceability of any other provision. If any provision of the Official Contest Rules is determined to be invalid or otherwise unenforceable, then the Official Contest Rules shall be construed in accordance with their terms as if the invalid or unenforceable provision was not contained therein. The Sponsor reserves the right at its sole discretion to disqualify any entrant who tampers or attempts to tamper with the entry process, the operation of the Contest and/or Contest Website, violates the Official Contest Rules, or acts with intent to annoy, abuse, threaten or harass any other person. Warning: any attempt by an entrant or any other individual to deliberately damage any website associated with this contest or undermine the legitimate operation of the contest is a violation of criminal and civil laws, and the sponsor reserves the right to prosecute and seek damages to the fullest extent permitted by law.

Without limiting the foregoing, the CHIMP Technology Inc. and CHIMP: Charitable Impact Foundation (Canada) shall not be responsible for: (a) any incomplete or inaccurate information that is caused by Contest website users, or by any of the equipment or programming associated with or utilized in the Contest, or by any technical or human error which may occur in the processing of submissions in the Contest; (b) lost, interrupted, or unavailable network, server, service provider, on-line systems, telephone networks or telephone lines, or any other connections; (c) the theft, destruction, loss or unauthorized access to, or alteration of, entries; (d) any problems with, or malfunctions or failures of, telephone networks or lines, computers or computer on-line systems, servers or providers, computer equipment, software, viruses or bugs; (e) garbled transmissions or miscommunications; (f) failure of any e-mail to be received by or from the Contest judging organization or Sponsor for any reason, including but not limited to traffic congestion on the Internet or at any website or combination thereof or technical incompatibility; (g) damage to a user's computer equipment (software or hardware) occasioned by participation or downloading of materials related to this Contest; (h) printing, distribution, programming or production errors, and any other errors or malfunctions of any kind, whether human, mechanical, electronic or otherwise; or (i) technical, pictorial, typographical or editorial errors or omissions contained herein.

Get our best news, stories, and tips for making an impact. Subscribe to the newsletter.